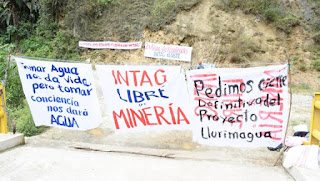 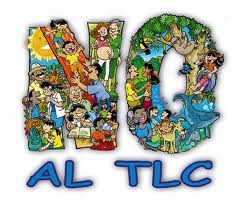 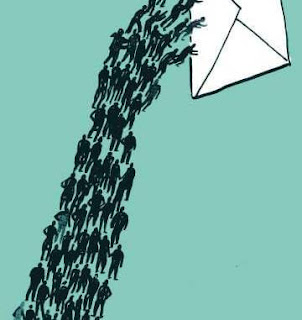 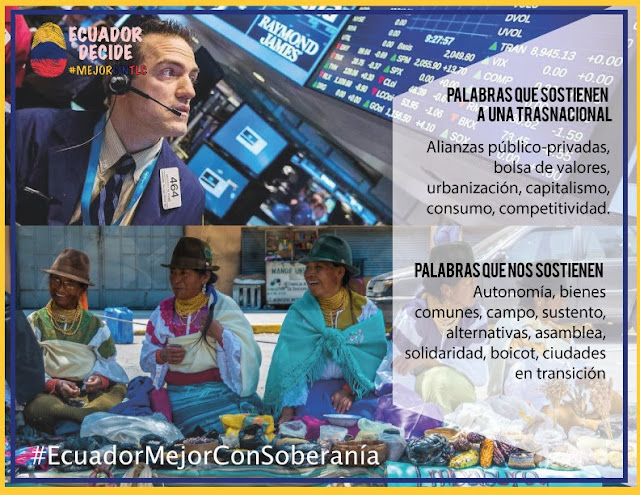 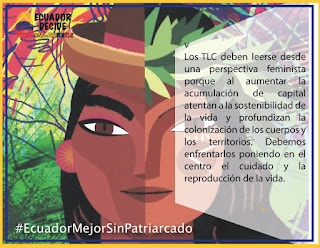 Texaco against life
From 1964 to 1992, the Ecuadorian State granted in concession, without the consent of its inhabitants, 500 thousand hectares of jungle, biogenetic heritage and home of ancestral peoples, to the U.S. Corporation Texaco.


For 26 years in Ecuador, the Texaco Company extracted 1,5 billion barrels of crude oil, perforated 356 wells, spilled tons of material and toxic wastes in rivers and soils, and threw more than 16 billion gallons of water with carcinogenic toxic waste.

The activities of Texaco caused serious damage to the population and nature:

• Thousands of cases of cancer and other degenerative and disabling health problems.
• Contamination of soils and water, which prevents peasant-settlers and the Siona, Siekopai, Kofán, Shuar,
Waorani and Kichwa communities from producing their food, and forces them to buy the water they used to get
from rivers and slopes at high prices.
• Due to the concessions in its territory and to the increasing pollution, part of the population of the native peoples was displaced from their homes.
• The forced contact, especially caused by the construction of highways to widen the oil frontier, caused
the extinction of the indigenous groups Tetete and Sansahuari.
• Violence was exercised against women and the working people of the company


Thus, in 1993, 30.000 people affected in the northern Ecuadorian Amazon filed a lawsuit in the U.S. courts
against the transnational. This case is known in the courts as Aguinda vs.Texaco and was presented at the same time as the demand to the same company for affected communities in Peru, a case known as Jota vs.Texaco.

After ten years of processes, the U.S. court stipulated that the company must submit to the Ecuadorian and Peruvian courts respectively. Then, the Ecuadorian communities joined forces in the “Union of Affected by the Oil operations of Texaco” (UDAPT for its initials in Spanish). UDAPT fought for justice for other thirteen years in the case called "Trial of the Century".

In response to the trial started by the victims, the Texaco company, subsidiary of the Rockefeller Chevron
Corporation since 2001, lashed with several actions:

1. Sued the Ecuadorian State in New York in 2004. The case, known as Chevron I, was ruled in favor of the
Ecuadorian State;
2. In December of 2006 (case Chevron II) and in September 2009 (case Chevron III), the company took the
Ecuadorian State to a court of arbitration in The Hague. Their allegations were based on the Treaty of Promotion and Reciprocal Protection of Investments (TBI) signed between the United States and Ecuador in 1993, during the neoliberal government of Duran Ballen and in force since 1997 -five years after the oil company terminated its contract with the Ecuadorian State-;
3. Appealed the judgment of February 14, 2011, given by the President of the Provincial Court of Sucumbíos. In which it was ordered to pay 9.5 billion dollars for environmental damage repair. This sentence was
ultimately ratified in the Constitutional Court of Ecuador on July 10th of last year;
4. Initiated a trial in the U.S. against the affected people accusing them of extortion and use of corrupt means, and
5. Initiated more than 20 demands in the U.S. against the people affected, looking for clues to attack those who estimated the damages.

Bilateral investment treaties (TBI) and their role in protecting corporations

Ecuador Decide, as a platform of social organizations against the trade agreements based on free market, have alerted that the TBI are instruments of the transnational companies to increase its monopoly. Instruments to assure its impunity in the face of damages committed by their violence and voracious extractivism. And for governments to put the state structure at the service of corporate interests in exchange for economic and political favors.

The TBI was denounced by the Ecuadorian Assembly on May 3rd, 2017, on the basis of the recommendations by the Integral Citizen Audit Commission of the Bilateral Investment Protection Treaties, and the International Arbitration System (CAITISA in Spanish). Nonetheless, its detrimental effects for Ecuador continue through several business demands against the Ecuadorian state due to avalidity clause of 10 years after they denounce. 26 demands are current: 50 % in the oil sector, 19 % related to electricity, and 12 % in mining. The Ecuadoran State is sued by 11.188 ´966.571 dollars. Until April 2017 the Ecuadorian government has paid to Oxy, Chevron and other corporations 1,342'115.969 dollars and it has spent 155'929.417 dollars in international lawyers.

On July 10th, 2018, the Constitutional Court of Ecuador ratified the judgment of the ‘Trial of the Century' in favor of the citizens affected by Chevron-Texaco. Despite the pressures of the U.S vice-president, who, in a historic visit to Ecuador, offered a Free Trade Treaty (NAFTA) if Ecuador eliminated topics qualified by him as “irritant“. Among these was the trial of the persons affected by Chevron-Texaco.

The political pressures of Texaco towards the governments of turn in Ecuador are not new. In the year 1995, the Government of Duran Ballen-Dahik signed the contract for environmental remediation, in which the State releases Texaco from liability and commits to not carry legal action against it. In 1998, after Texaco allegedly
remediated the corresponding area, the Mahuad government signed the settlement act ratifying Texaco's release of responsibilities. All this without consulting the affected people. In the year 2008, Chevron-Texaco got the United States to threaten the Ecuadorian State with not renewing the tariff preferences if it did not make the affected communities desist of their complaint. In 2016, in order to place sovereign bonds on the international financial market, the Ecuadorian Government pressured those affected to lift the embargo on the resources that legally corresponded to them. In July of 2016, the Ecuadorian state paid Chevron-Texaco 112 million dollars in the known Chevron II Arbitral Award as compensation for supposed refusal to access justice, although in his public speech the president Rafael Correa said that no pretention of the company should be accepted.

Two months after the Constitutional Court of Ecuador ratified the ruling on behalf of those affected by ChevronTexaco; on September 7, 2018, The Hague Tribunal, in the Chevron III Arbitral Award, sentenced the Ecuadorian State to take over the damage caused by the company and to repair the population.

• We endorse the historical fight of the UDAPT, the organization of the communities of the northern Amazon affected by the oil pollution left by Chevron-Texaco, which shows us the impacts of the predatory economic system that we must overcome with initiatives of relationship, production and consumption, that are sovereign, aware, communitarian and ecosystemic. Looking at the impacts of extractive activities also reminds us of the importance of auditing the impacts of oil exploitation and the urgency to articulate ourselves in order to prevent this logic from expanding towards the south-central Amazon with the new round of South-East tenders. As well as stopping mining concessions that would affect 15% of Ecuadorian territory.

• We welcome the statement of the Ombudsman of Ecuador and we call on the Ombudsmen in Latin America to support the indigenous peoples and peasant communities and urban areas in their actions in search of protection against the onslaught extractors and the demand for reparations for abuses already incurred.

• We call to the UN and especially to the workgroup that prepares the Agreement against Corporate Impunity to watch that the international human rights agreements are fulfilled and are binding so that they prevail over commercial agreements.

• We call on the population and social organizations of Ecuador and the world not to buy products or services of Chevron in rejection of their claim of impunity in the face of the damage left in the Ecuadorian Amazon. We must use the participation spaces for citizens in order to prevent transnational interests prevailing over human rights and nature.

• We demand that Ecuadorian judges fulfill their role of sovereign justice guarantors without political pressures. Chevron's demands against the Ecuadorian State must not be related to the demands of reparation and justice demanded by the affected communities.

• We demand that the national government do not allow any interference or pressure from the transnational lobby. That includes removing officials whose function is to defend Ecuador and have links with the company. All government efforts must focus on preventing this injustice to communities affected by extractivist voraciousness. This arbitral award does not proceed because the contract with the company ended in 1992 when the TBI had not been signed.

• We remind government decision makers that article 422 of the Constitution states that no international treaties or instruments may be held in which the Ecuadorian State give sovereign jurisdiction to instances of international arbitration, in contractual disputes or of a commercial nature between the State and private individuals or corporations. 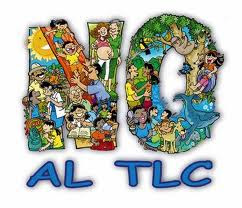